Stacey Cunningham is a banker who made history in 2018 when she was named the New York Stock Exchange‘s first female president in its 226-year history.

Stacey Cunningham began her time at the NYSE as an intern in the summer of 1994, then as a trading floor clerk in 1996. She worked for more than eight years as a specialist for a unit of Bank of America after graduating from Lehigh University with a degree in industrial engineering. She started as the director of capital markets at Nasdaq in March 2007. She was eventually named head of sales for U.S. transaction services in August 2011.

Stacey Cunningham is in the ranks of high-powered women leading Wall Street today. Among them is Adena Friedman, who became the chief executive of the Nasdaq exchange in January 2017. In 2002, Catherine Kinney became the NYSE’s first woman co-president. But that was at a time when the exchange’s CEO or chairman was the ultimate boss. 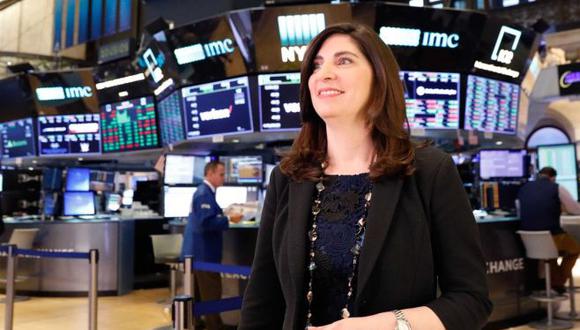 Stacey Cunningham has pointed to Muriel Siebert, the first woman to own a seat on the NYSE in 1967, as a strong inspiration for her own career. “I started my career on the floor of the New York Stock Exchange almost 25 years ago and it never occurred to me for a moment that perhaps that wasn’t an opportunity available to me as a woman. I didn’t think about it and it’s in large part because Muriel had already done that work … I didn’t wonder whether or not I belonged. Muriel Siebert may or may not have been thinking about anyone else at the time, but anytime you embrace ambition and you redraw the boundaries, you’re not just redefining them for yourself, you’re defining them for anyone that follows, and I thank her for that.”

Despite the new era of female leadership on Wall Street, Stacey Cunningham wants to progress this even further “We still struggle to get the more equal ratio of women in finance in general”. When Stacey Cunningham started at the exchange, it was overwhelmingly male, and men still dominate it. Of the 21 executives of Intercontinental Exchange Group (ICE), NYSE’s corporate parent, only four, including Stacey Cunningham, are women. Around the time of her appointment as president, it was announced that the “Fearless Girl” statue, which has become a global symbol of female business prowess, would be moved from her spot staring down Wall Street’s bronze “Charging Bull” to a new home facing the New York Stock Exchange.