Sonia Sotomayor is the United States’ first Latina Supreme Court Justice and the third woman to serve in the highest US court. Sotomayor was born in the Bronx to Puerto Rican parents and grew up on a public housing estate. She decided to become an attorney when she watched the legal drama ‘Perry Mason’. Nominated by President George H. W. Bush, she first became a judge in 1991, and was nominated by President Barack Obama to the Supreme Court in 2009.

One of Sotomayor’s career highlights include being ‘the judge who saved baseball’. As a federal district court judge in New York, she ended the 1994-1995 Major League Baseball strike when she restored the previous labour agreements terms on players’ salary caps.

As a judge, she has described her philosophy as ‘fidelity to the law’, in her 2009 confirmation hearing she explained that she was ready to apply the law, and appreciated she was not making the law as a judge. 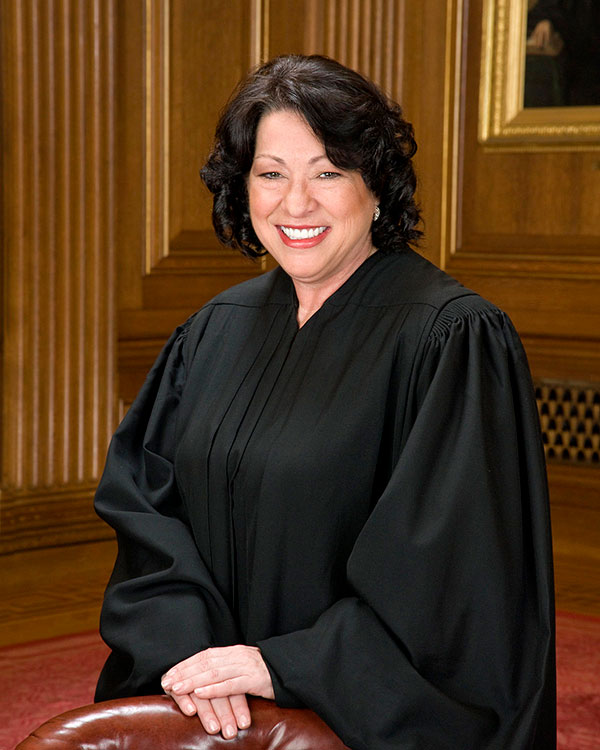 Sotomayor has consistently demonstrated her commitment to her philosophy. This included upholding a major part of the Affordable Care Act in King v Burwell and Obergefell v Hodges, legalising same-sex marriage nationwide. Furthermore, when the Supreme Court upheld former President Donald Trump’s executive order, also known as the Muslim travel ban, Sotomayor dissented, and explained the ‘constitution demands, and our country deserves, a Judiciary willing to hold the coordinate branches to account when they defy our most sacred legal commitments’.

In addition to her judicial career, Sotomayor has authored four books: her memoir: ‘My Beloved World’ and three books for children: ‘The Beloved World of Sotomayor’; ‘Turning Pages: My Life Story’; and ‘Just Ask! Be Different, Be Brave, Be You’. Her book ‘Just Ask’ centres around twelve children with different abilities and was inspired by her experiences living with diabetes. Sotomayor wants every child to know that no matter their conditions in life, they are special in a good way, and able.

Sotomayor swore in Vice President Kamala Harris, at the inauguration of President Biden earlier this year. Her calls for reform of the criminal justice system, concern for the rights of defendants, and passionate speeches surrounding issues of race, gender and ethnic identity serve as an inspiration to young women in the United States and across the world.