Nemonte Nenquimo is an Ecuadorian environmental activist and recipient of many accolades including the 2020 United Nations Environment Programme’s Champions of the Earth Award for Inspiration and Action, and inclusion on Time Magazine’s 100 Most Influential People of 2020. Nenquimo is president of the Waorani of Pastaza, a group of indigenous hunter-gatherers from the Ecuadorian Amazon.

Waorani territory falls partly within Yasuni National Park, a notably biodiverse area that ‘may have more species of life than anywhere else in the world’, and Nenquimo is dedicated to protecting this territory from environmental damage. In interviews the activist has described being shocked by the impact of oil extraction activities on local environments from a very young age, and in 2018 Nenquimo launched the ‘our rainforest is not for sale’ digital campaign against an attempt by the Ecuadorian government to sell 16 oil concessions across seven million acres of rainforest. 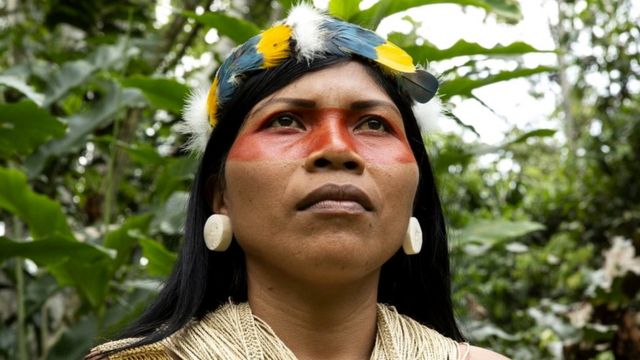 In 2019, Nenquimo then filed a lawsuit against the Ecuadorian government for their attempts to sell 500,000 acres of Waorani land to oil companies without Waorani permission. The ruling in favour of Nenquimo and the Waorani was heralded as an historic moment in indigenous peoples’ fight for ancestral Amazonian rainforest lands; following the victory, the Ecuadorian National Assembly passed a bill requiring prior consent before indigenous land can be sold in the future. In an interview with the BBC, Nenquimo spoke of the confidence she had in her victory: ‘We were so certain that this territory is ours because we are the ones living here, we just could not permit this to happen.’

Nenquimo is also a founding member of Ceibo Alliance, a non-profit group representing four nationalities of the Ecuadorian Amazon, the A’i Kofan, Siekopai, Siona, and Waorani peoples. The group works together to defend their ‘culture, territory, and life’ from the oil, logging, and palm oil industries.

Nenquimo has also worked with Oscar-winning actor Leonardo DiCaprio, himself a staunch environmentalist. In a piece accompanying her inclusion in the Time Magazine 100 Most Influential People, DiCaprio emphasised the strength of Nenquimo’s dedication to her cause and the significance of her fight: ‘Nemonte lives her fight, and to have a conversation with her is to witness a rare clarity of purpose…She inspires those she speaks with to shoulder the nearest boulder and walk alongside her as her movement continues to grow.’

Mary Barra and the importance of female CEOs